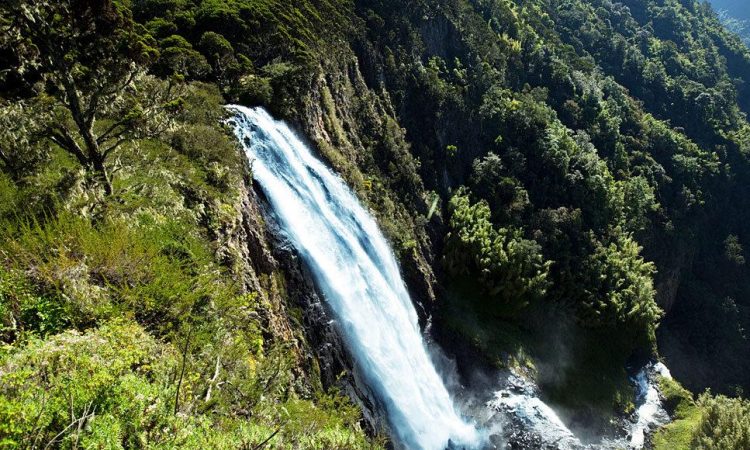 Because of the Aberdare Mountains ranges and the remarkable scenic beauty, Aberdare has become a popular destination for hiking and photography safaris in Kenya. This park is covered by wild moorlands and offers spectacular views of Mount Kenya and numerous lakes of the Great Rift Valley.

The intention behind the establishment of Aberdare national Park in May 1950 was to protect the Aberdare Mountains and the ecosystem located in the same vicinity, the ranges of Aberdare derives their name from Lord Aberdare the president of the Royal Geographical Society and they were named by Joseph Thompson an explorer who visited the ranges by 1884. Aberdare ranges have a significant traditional importance to the Kikuyu people who believe the mountains are the home to their god “Ngai” and they refer to them as Nyandarua“the drying hide” which is due to the distinctive folds of its silhouette.

Elizabeth II become the queen of England (United Kingdom) while on a Kenyan safari in Aberdare, this park was a well known headquarters of Dedan Kimathi the leader of Mau-Mau uprising. In 1920 a large population of Europeans settled on the Aberdare ranges and because of the European settlements the ranges were refered to as the “white highlands”

Aberdare is dominated Aberdare ranges/mountains; Aberdare Mountains are a 160 kilometers long volcanic range forming the easternmost wall of the great rift valley. These ranges steeply fall into Kinangop plateau on the west, on the east ranges slope more gently,. Aberdare ranges stand at the maximum elevation of 4000 meters above the sea level, the high altitudes are forested and from the summit of the ranges you get spectacular views of Lake Naivasha and Mau Escarpment. The highest peak of the Aberdare ranges is by the names of Mount Santima and the second highest is mount Kinangop at the elevation of 3,906 meters. Other peaks forming Aberdare ranges in Aberdare national Park include Chebuswa at 3364 meters, Table Mountain at 3791 meters, Martini Hill at 3698 meters and elephant at 3590 meters.

Waterfalls in Aberdare national park create spectacular scenery as they plunge from high altitudes and flowing down amidst forests, the main waterfall in Aberdare is Karuru water fall flowing at the elevation of 273 meters with 3 steps. The first step flows at 117 meters, second step at 26 meters and 3rd step at 130 meters, other waterfalls found in Gura falls located on the opposite side of Karuru waterfalls and Magura falls situated across the mouth of the Queen’s cave.

Tourist activities to do in Aberdare national park

This park is one of the most rewarding birding spot in Kenya, this park is a home to a huge population of birds with over 250 bird species including Aberdare cisticola a critically endangered species and Jackson’s francolin the regional endemic species.

Birding in Aberdare is done throughout the year but the best experience is got in the period of November to April when migratory bird species from North Africa and Europe are present in the park.

Trout fishing is another exciting and entertaining safari activity in Aberdares national park done in small moorland’s rivers with River Chania as the major river for this experience, fish caught on this experience is barbecued on the evening fire at your lodge as a prize.

Aberdare national park has been recognized as one of the top popular destination for mountain climbing safaris, this experience leads you to the peak of Aberdares. This experience takes you through moorlands and forest walks under the guidance of a ranger guide, Mountain climbing in Aberdares is done on the northern moorland comprising of four peaks lieing at the altitude range of 3500 meters to 4000 meters with Ol Donyo Lesatima as the highest peak. Hiking in Aberdares national park is done on Kinangop plateau leading to the top of Karura falls where you get to watch Karura stream as it slides over the rocky lip into abyss of 272 meters. At this point you will also enjoy scenic view of of the Guru falls the tallest cascade in Kenya at the altitude of 305 meters.

Where to stay in Aberdare national park

How to get to Aberdare national park

To get to Aberdare national Park tourists can use road and air transport, Aberdare is situated in the East Africa Rift Valley in the central region of Kenya. From Nairobi the capital of Kenya the park is in a distance of 150 kilometers, by road Aberdare is accessed using a tarmac route which runs from Nairobi to the park. By air chartered domestic flights are offered from Jomo Kenyatta international airport to Mweiga Airstrip situated opposite from the park’s headquarters.