Amboseli is endowed with a backdrop of the snowcapped Mountain Kilimanjaro standing at the height of 5895 meters above the sea level, the park combines a unique ecosystem which includes special hydrology, topography, geological and cultural history. Amboseli is dominated by 5 habitats which include open plains, acacia woodland, rock formations of lava covered with thorny bushes and palm trees, swamps and marshlands covering a part of a dry Pleistocene lake basin called Amboseli. Amboseli Lake is usually dry in the dry season and floods in the wet season.

The area covered by Amboseli was formerly known as Empusel, this area was the most feared region of the Masai cultural people to be crossed by a foreigner. In 1883 the area was penetrated its first foreigner in the names of Joseph Thompson, upon his arrival he was impressed and astonished by the impressive landscape, the backdrop of Mount Kilimanjaro, huge concentration of wildlife inhabiting in the area, dry lake bed and swamps. In attempt of saving the area from being destroyed Amboseli national park was established in 1906 as a national game reserve and in 1974 it acquired a status of a park and its named was changed to Amboseli national park.

Because of the great ecological system and culture in Amboseli national park, the area was recognized as a UNESCO Heritage site in 1991.

Amboseli national park is one of the leading animal habitats in Kenya with a huge concentration of wildlife species including large herds of big tusked elephants, the big tusked elephants are the trademark wildlife in Amboseli national park and they are sighted roaming in the dusty plains of the park and Ol Okenya swamp. Elephants in Amboseli national park have impressive ivory which excites visitors of the park and these elephants are attracted to woodland yellow fever trees and doum palm known as Ol Tukai found in the heart of Amboseli, it is in the Ol Tukai as refered to by the Masai and Makindu where you get to spot the elephants. 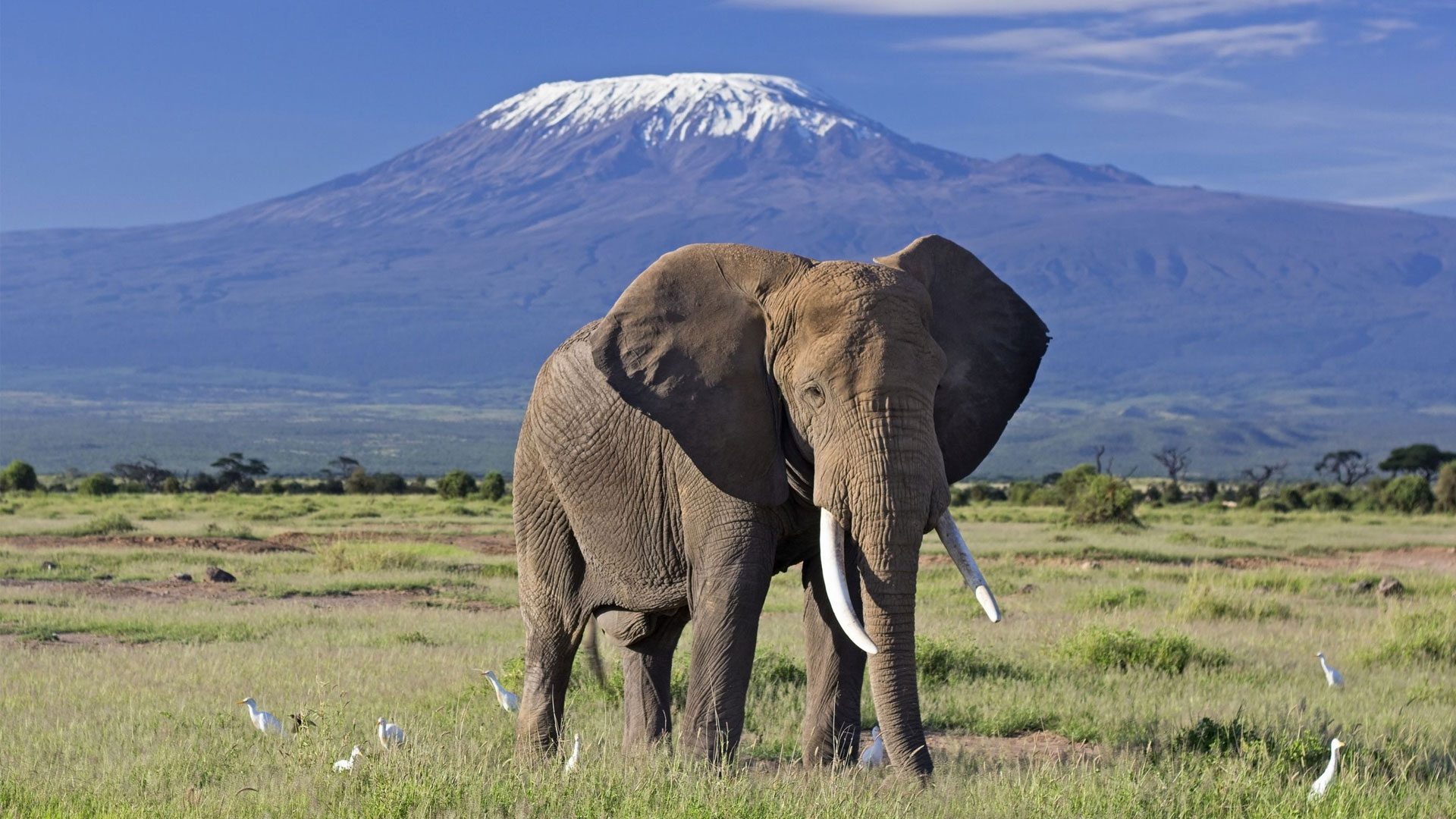 Other wildlife species / animals in Amboseli include cape buffaloes, lions, cheetahs, spotted hyenas, leopards, Masai giraffes, zebras, wildebeests, hippos, impalas, grant’s and Thomson’s gazelles and many more. These animals mostly buffaloes, hippo and elephants are usually spotted in Enkongo Narok swamps and many other permanent swamps which divide the grey landscape of Amboseli into broad swatches.

Amboseli national park is a recognized birding site in Kenya and a habitat to over 400 bird species which are recorded to live in the park, birds in Amboseli have been noted to reside in the swamps situated in central region of the park, acacia woodland and the grasslands. Noted birds in Amboseli national park include flamingoes which are in large numbers most especially in wet seasons in the periods of March – May and October to December.

Amboseli national park is dotted with seasonal lakes which are mainly located in the western region of the park, these lakes occupy the drained basin of an ancient lake of the Pleistocene and some of the main lakes in the park include Kioko Lake, the Simek Lake, the Counch Lake and Amboseli Lake. These lakes are usually dry in the dry season and fill up in the rainy season and the almost have the same depth of not more than 50 cm, these lakes are excellent birding spot in Amboseli as their shores are covered with papyrus which are home to a huge concentration of birds.

The seasonal lakes in Amboseli national park are also fed by Simek River which has its sources of water from Enkongo Narok swamp, on the shores of these lakes numerous bird species such as African Jacanas, Goliath Herons, grey craned cranes, hartlaub’s bustards, Rufous chatterer, yelow-necked spur fowls and many more are found on these lakes

Amboseli national park’ landscape features several swamps and marshes which are habitat to birds and water wildlife, the swamps and Marshes are water sources serving the park and its animals. The marshes consisting of intense and bright green vegetation offer a great contrast to the arid and dusty plains of Amboseli national park, the marshes and swamps are mainly found in the central region of the park and the main mashes in the park include Enkongo or Ngong Narok Narok, Engone Naibor, Ol Tukai, Longinye and Ologinya or Ol Okenya.

The observational hill in Amboseli national park is a pyramid-shaped hill situated in western of the park, the observation hill is the perfect spot for viewing animals in the park as it is the only place where tourists are allowed to get out of their cars and take a walk. Before Amboseli national park was declared as a protected area the observation hill was inhabited by the Ndorobo people who are known hunters and gatherers for many years, the presence of these people on this hill has been witnessed by signs and trances of their property and implements. And because of this the area given a Masai name Normatior meaning “the place of pottery”

The observation hill was formed due to volcanic activity during the same period mountain Kilimanjaro was formed, the summit of the hill offers an ideal lookout for plains, swamps, wildlife and roads below. The hill features a staircase carved from the volcanic rock offering access to the summit where the observation hill is situated, the hill offers 360 degrees view of Amboseli national park’s lakes, marshes, lakes and on a clear day the views of the snowcapped Kilimanjaro Mountain. 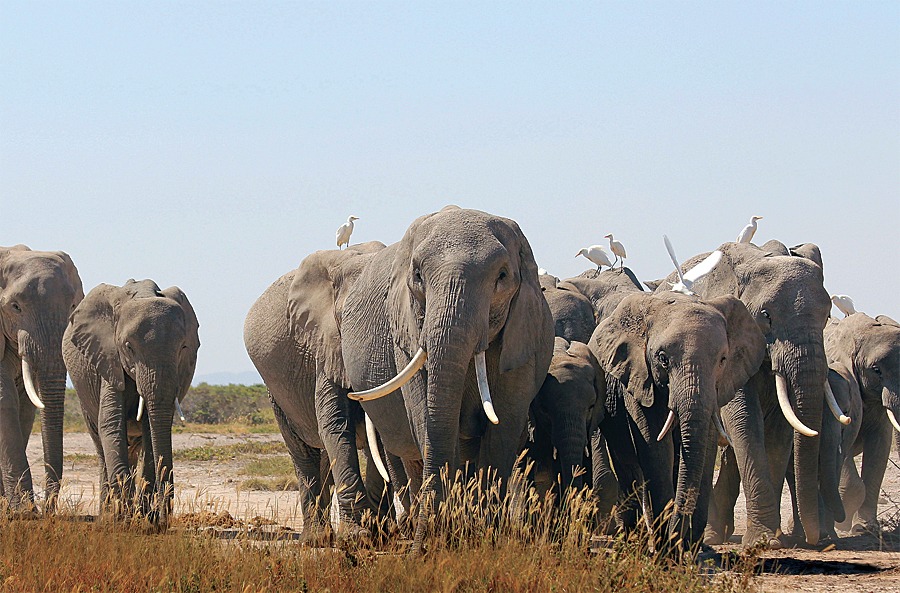 Visits to Elephant Research camp are only allowed with prior arrangements and when you visit a lecture of one hour is given to the visitors, in the lecturer researchers explain their work and elephant conservation related issues to the visitors and also questions asked by the visitors are answered.

Masai people are tall dark people worldly famous for their single-handed acts bravely and enormous prowess they exhibit in fights with wild animals, some of the beautiful aspects about the Masai people and their culture are the stripped colorful strip shukas and ornaments they wear on a day and the beautiful Manyattas. The Manyattas were built in a circular form using local materials like poles, mud, grass thatch and cow dung

Amboseli national park is dominated by permanent swamps and marshes that are Enkongo Narok, Olokenya and Longinye situated in the center of the park. These swamps are perfect spots for spotting elephants and hippos, giraffes are best spotted in acacia woodlands. Sinet causeway crossing Enkongo Narok near Observation hill is a perfect spot for getting a close up look of the elephants and for spotted hyenas, lions, cheetahs, zebras, antelopes, and wildebeests the grasslands are the best site. In Amboseli national park there is the observation hill is which offers 360 degrees fine views of the park’s landscape, swamps and animals.

Various sessions of game viewing offer amazing unforgettable experiences  as you view animals and the scenic landscape of the park from the open roofs of the your 4X4 wheel vehicle.

Hot air balloon safari experience in Amboseli is one of the best way of exploring the park as it offers ariel views of the park and its beautiful landscape, hot air balloon safaris usually start as early as 06 am offering spectacular views of the sunrise and snowcapped mountain Kilimanjaro. From the balloon suspended in the air you get to enjoy views of large herds of elephants and many other animals in the park.

Cultural visit in Amboseli park Kenya offer an opportunity for tourists to visit the amazing Masai communities situated along the borders of the park, the Maasai people poses unique culture, traditions and norms which are encountered upon your visit.  On your cultural visit you get to enjoy local activities like livestock rearing, picking local herbs and sights of local manyattas, local clothing of shukas adorned with beautiful ornaments and many more.

Where to stay in Amboseli national park

How to get to Amboseli national park

The park is located in the rift valley region of Kenya in Loitoktok district, from Nairobi the park lies in southeast of the city in a distance of 240 kilometers taking approximately 4 hours of drive. Amboseli national park is reached using both road and air means of transport, using road various routes from Nairobi are used to get to the park and that are Nairobi – Arusha road via Namanga through Meshanani gate and Nairobi via Emali route.

By air means of transport, Amboseli is reached using chartered flights from Wilson airport in Nairobi to Amboseli airstrip. These scheduled flights are offered by numerous domestic flights such as Air Kenya, SafariLink, Mombasa Air Safari and many more.