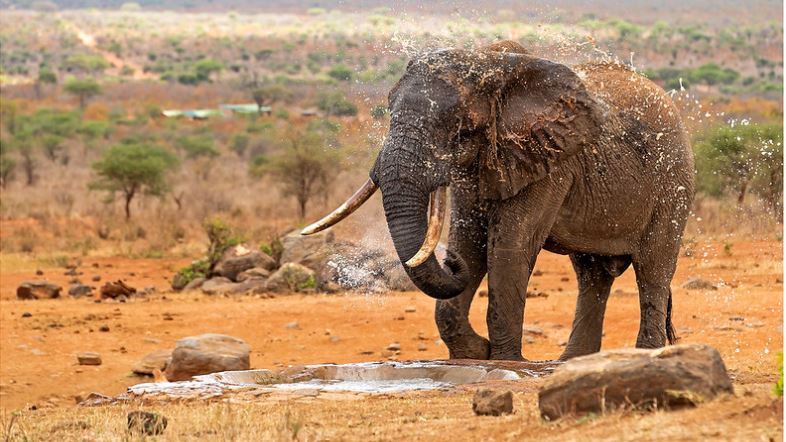 Tsavo west national park is popularly recognized as one of the great wildlife habitats in Kenya hosting various species of animals, the park is famously known for its elephants covered in red dust and man eater. Tsavo West national park is the only place/protected area where you get to spot red elephants and few remaining populations of hirola antelopes, animals in Tsavo West national park live in the various vegetation zones of the park such as open grasslands, scrublands, riverine vegetation and acacia woodlands.

Mzima springs in Tsavo West national park are a series of springs and a natural reservoir of water feeding the ecological system of Tsavo West national park, Mzima Springs are also referred to as Mzima pool and they are located in the western region of the park and situated in a distance of 48 kilometers from Mtito Andrei. Mzima springs ae surrounded by thicket vegetation with fruit bearing trees attracting numerous birds and monkeys to the area and they can easily be spotted.

Lake Jipe is a great site for both bird and wildlife viewing in Tsavo west national park, Lake Jipe is one of the water sources in the park and it is visited by many animals such as hippos, crocodiles, lesser kudus, elephants, hartebeests and many more to drink water most especially in dry season. Lake Jipe is also a habitat for birds and numerous species of birds can be sighted at the lake and these include storks, egrets, lesser jacana, African swamp hen, Madagascar squacco heron, black heron, African skimmers, Egyptian geese and many more.

Tsavo West national park is famously known for wildlife and birdlife but it is more than that as it hosts the first world war monument of East Africa campaign, the first world war site – East African campaign commemorates the campaign of the world war fought by Kenyan natives. This campaign was the most bizarre of all campaigns and was fought in the thorny scrub and densely forested plains of Tsavo West national park, this campaign was referred to as “the last gentleman war waged under the code of honor” and while fighting this war the local people used guerilla tactics they had adopted from African tribal fighters.

First World War site is open for visitation by travelers on a Kenya safari in Tsavo West national park on a guided walking safari.

In conclusion, Tsavo West national park is one top destination you ought to visit while on your African safari in Kenya most especially for Kenya wildlife tours as it has more memorable and adventurous safari activities to offer. Book your safari now and have a magical experience.