Ruaha National Park is an excellent Tanzania safari destination located in a more remote region when compared to other Tanzania safari destinations, the park is located in the south –central region of Tanzania. Ruaha national park is a beautiful destination for Tanzania wildlife safaris covering an area of 20226 square kilometers, the park is situated in about 130 kilometers from the Kizigo – Muhesi ecosystem made up of Rungwa game reserve, Kizigo and Muhesi game reserves and the Mbomipa wildlife management area. Ruaha park lies in the East Great Rift Valley at an elevation of 2,500 to 5,200 feet and also borders Selous game reserve to the west, Serengeti national park to the south. 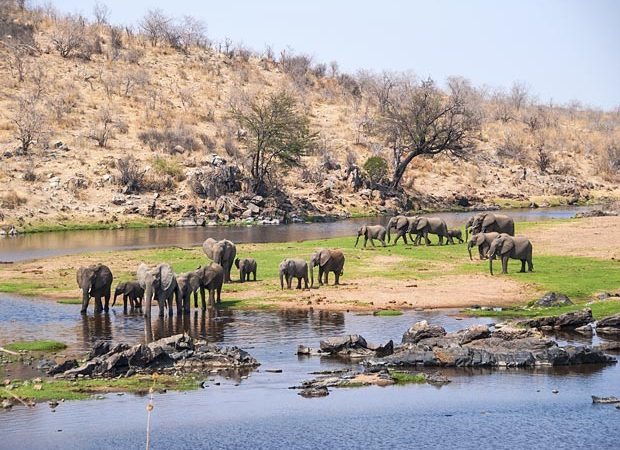 Ruaha park’s landscape is composed of the Great Ruaha River, rolling holl, rocky escarpments and vast open plains dotted with the iconic Africa Baobab trees, the park has a unique uninterrupted pristine ecosystem composed of fauna and flora. Ruaha park forms an intersection where the eastern and southern African eco-regions converge and this result in a plethora of rare and diverse species.

The national park is a great habitat for wildlife in Tanzania, the park is one of the few places in Tanzania and Africa at large where both greater and lesser kudus can be seen, other habitats in the park include a large number of elephants estimated to be about 12,000 and the park is a stronghold for lions in Africa hosting 10% of the lion population in the world. Other animals found in Ruaha park include Grant’s gazelles, elands, oribi, giraffes, zebras, waterbucks, bush bucks, impalas, cape buffaloes, jackals, wild dogs, cheetahs among others.

The park is named after Ruaha River flowing along the southeastern boundary of the park, the name Ruaha is a local slag originating from the Hehe word “Ruhava” Meaning River. Ruaha as a protected area was first gazetted in 1910 as Saba game reserve by the Germany and when the british administrators took over Tanzania, the name was changed to Rungwa game reserve in 1946. In the same year, a small region of the them Saba game reserve was gazetted as Ruaha park and a small of the South-Eastern part of the Great Ruaha River was incorporated into the park in 1974.

SAFARI ACTI VITIES TO DO IN RUAHA NATIONAL PARK

The park is a great destination for Tanzania wildlife-watching safaris offering tourists an opportunity to see a variety of animals including the predators such as a huge population of lions (10% of the global population). Game viewing in Ruaha park is done on game drives offered as morning game drive, full day game drive and night game drive.

Game viewing in Ruaha national park is best in the morning and afternoon, for tourists in search for nocturnal animals such as lions, cheetahs, leopards, civet, porcupine among others,  night game drive is the best option.

The park is one of the most important Bird Areas in Tanzania and a very rewarding destination for Tanzania bird watching safaris, the park is a home to over 574 recorded bird species including resident and migratory species from Europe. Ruaha national park is a migratory route for Eurasian ad Palearctic birds such as hobbies and Amur falcons and on some occasion these birds came flying in front of a huge storm.

Walking safaris in Ruaha national park is offered as short walks lasting between 1-4 hours and long walks lasting more than 5 hours. This experience is done with an experienced and skilled guide or ranger and during your walk through the park, you get to watch many animals such as African wild dogs, Bohor reedbucks, grant’s gazelles, klipspringers, sable and roan antelopes, Lichtenstein’s hartebeests, elands residing in the park and many birds such as, white headed buffalo weaver, Ruaha red-billed hornbill, miombo grey, tit, yellow-bellied hyliota, miombo scrub robin among others and enjoy the scenic landscape.

HOW TO GET TO RUAHA NATIONAL PARK

Travelers on a Kenya safari can get to Ruaha park by either road or air means of transport,